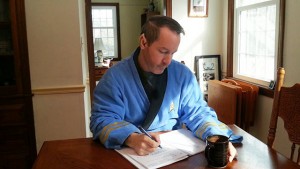 Like most authors, I get a lot of questions about my books. One question I struggle to answer is “Was the book hard to write?”

On the one hand, writing my books required considerable time and effort. Researching, drafting, editing, re-editing and then re-re-editing all involve a certain amount of mental exertion and can get taxing after a while. Plus, I was on active duty in the military while I wrote my first two books, so the only time I could carve out uninterrupted quiet time to write was at 5:00 am. Getting out of bed so many dark mornings in a row is nobody’s idea of easy.

On the other hand I enjoyed the experience so much that I hesitate to call it “hard.” In the wee hours before dawn the house is quiet, the coffee is hot, and I have the whole world to myself. I find the blank page inviting and exciting. I love the feeling of creative expression and I don’t even mind the editing process.

In fact, the hardest part most days was having to stop writing and go do other things. And of course habit makes things easier too. The 100th early morning was easier than the 1st or 2nd.

So if I’m pressed to answer the hard question, I must say no, it was not “hard” to write these books. Partly because they were so much fun but mostly because I refused to let my writing turn into hard work. Every time the strain level started to get uncomfortable, each time I noticed things were becoming difficult, I would change my approach and try something new.

I wrote about this strategy in my most recent book, “The Simplicity Cycle”, pointing out that “signs of strain are signs of opportunity for improvement rather than signs that all is well.” I have found that feelings of difficulty in my work usually reveal more about me and the way I’m working than about the work itself.

When writing is hard, it’s not the work that’s suddenly become difficult. It’s me. I’m heading in the wrong direction, losing focus, or trying to force a solution that doesn’t fit. In those situations the most effective approach is to throttle back, take a breath, reorient, then re-engage from a new angle.

See, when work is really hard, it often means we’re working wrong. This is a vital concept in our too-busy world. Many of us like to complain-brag about our demanding and hectic lives, about our full calendars and long hours.

We risk taking more pride in how hard we work than in how much good we deliver, and that means we risk missing the point entirely. Quite often, the difficulty of the act has nothing to do with the quality of the output.

In my own life, I get more work done – more meaningful, useful, productive work – when I stop working so hard, when I don’t allow myself to get too busy, when I maintain a sustainable pace rather than an exhaustive one.

In contrast, overvaluing busy-ness and difficulty can lead us to believe that never pausing and always struggling is a sign of professional competence, proof we are doing good work. The truth is that such an approach is a guaranteed formula for burnout.

Overvaluing difficulty also leads us to tolerate or even celebrate processes and procedures that are unnecessary complicated, in the mistaken belief that doing complicated things in complicated ways means we are doing good work simply because it is hard word.

Similarly, when we overemphasize hard work we risk explaining failure in terms of effort. We might excuse our failure by claiming we could not have worked any harder, as if the failure was unavoidable. Or we might promise to work harder next time, as if inadequate effort was the reason things didn’t turn out the way we wanted them to.

Sometimes that is the case, to be sure, but perhaps there is another way of looking at it. Here is The Simplicity Cycle again: “Should we have tried harder? Or was trying harder part of the problem?

Maybe we were pushing in the wrong direction, adding complexity and effort where simplicity and ease were called for . . . the path to increased goodness often involves removing unnecessary effort rather than tolerating it.”

Don’t misunderstand – it is good to sweat, good to challenge ourselves, good to pursue ambitious goals. It is good to get up early and work while others sleep. If we want to make a difference in the world around us, discipline is essential.

And one of the things we should be disciplined about is how much difficulty we allow in our work and in our lives. Sometimes the best results happen when we stop working so hard and instead walk an easier path.

Looking at it that way, the hard question may not be so difficult after all.