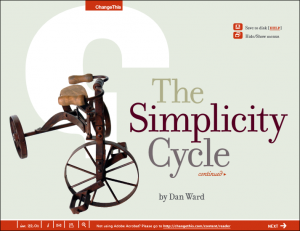 When I was in high school, I wanted to host Saturday Night Live when I grew up. I figured as a juggler, magician and fire eater, I could go out there and do some tricks on TV. What I didn’t realize is that 99% of the people who host SNL are actually plugging their new TV show, movie or album… and the likelihood of me ever being in that situation is pretty low. Um, duh.

In 2006, long after leaving high school, I kinda did the same thing with The Simplicity Cycle. I’d heard about a new website called ChangeThis.com, where people could publish short “manifestos” about creativity, innovation, design, or whatever else they might be interested in. Readers could download them for free, and it sounded like a cool way to share this crazy little Simplicity Cycle idea I’d been working on. Like my high school self, I didn’t notice that most of the manifestos were written by authors with a new book to publicize. Or if I did notice, I didn’t care because while I did not have a book yet, I had an idea. And I wanted to share it.

So I sent in a proposal, it was accepted, and I wrote The Simplicity Cycle Manifesto (version 1.0).

It’s not a bad piece, but it’s not awesome. It’s actually a lot like the first article from 2005 (see previous post). Most of the basic ideas are present, and much of the later nuance is absent. I greatly prefer the updated Manifesto I published in 2015 when the book came out (more on that in a future post). But if you’re interested in what this Simplicity Cycle thing looked like 9 years ago, feel free to download it.

And looking at it now, I see there are plenty of manifestos at ChangeThis that are not plugging a book. It’s a great site, with a ton of fascinating content and new stuff added all the time. So whether you have a book or not, I heartily recommend considering ChangeThis as an outlet for sharing your super cool ideas.

NEXT WEEK: Adventures In Self Publishing!